Write briefly about mould wash.
Mould wash: A coating applied in liquid form to walls of a mould cavity.
What is adaptive control?
Adaptive control: Adaptive control is a set of techniques that permit to adjust the value of control parameters in real-time, permitting to monitor of controlled variables even if plant parameters are unknown or if they change over time. This control is a special kind of non-lineal control, and the process can be split into two timelines: rapid time (feedback loop) and slow time (variation of control parameters, which affects automation).
What do you understand by the term machinability index?
The machinability index is used to compare the machinability of different materials in the various cutting process. It is an attempt to quantify the relative machinability of different materials.

What is tack weld?
Tack Welding is basically a temporary weld performed during the Fitting of a part. This is done to ensure dimensional stability before actual Welding starts. Normally once the Welding is finished, these tacks are removed or merged to be part of the final weld.
What is simultaneous (concurrent) engineering?
Simultaneous Engineering - A way of simultaneously designing products, and the processes for manufacturing those products, through the use of cross-functional teams to assure manufacturability and to reduce cycle time.
How jobbing foundry is different from captive foundry?
Captive Foundry: A foundry operation that is wholly incorporated into a larger manufacturing operation. A captive foundry usually only produces castings for the operation that it is a part of.
Jobbing Foundry: Normally produces a small number of castings of a given type for different customers.
What do you understand by the term "grit" and "grade" of a grinding wheel?
Grit or Grain of Grinding wheel: The grit or grain is used to indicate a general size of abrasive for making a grinding wheel. Grits or Grain size is denoted by a number that indicates the number of meshes per linear inch of the screen through which the grain pass when they are graded after crushing.
Grade of Grinding wheel: The grade refers to the harness or strength with which the bond holds the abrasive grains of a grinding wheel in a place. The Grade is indicated by the English alphabet A to Z.
Define thermo compression bonding.
Thermocompression Bonding – also called thermocompression welding – produces joints using indirect heat and force simultaneously.  The resultant bond corresponds to diffusion welding, meaning that the bond is not produced by melting at the contact points, but rather by solid-body diffusion.
What is the DCLASS system?
DCLASS Coding System  The DCLASS (Design and Classification Information System) was developed at Brigham Young University. The pan code portion of this system was developed because no commercial vendor was willing to provide such a  system for educational and research purposes. Although its primary use-to-date has been in the university environment, many companies are using it for prototype development. Because of die availability of DCLASS to educational institutions, it will be described in some detail in this section.
With diagram show a cylindrical robot.
The cylindrical robot has a rotary joint along the joint axis for rotation movement and a prismatic joint for linear motion. 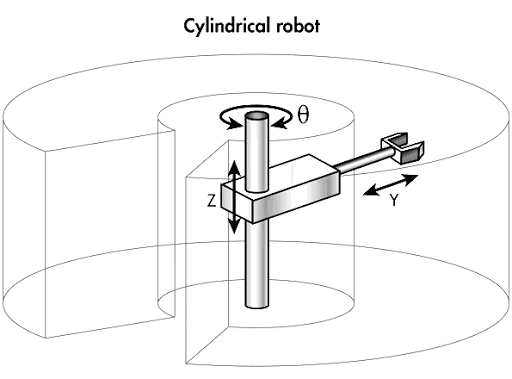