July 12, 2021
Closed die forging
Closed Die Forging is a forging process in which dies move towards each other and covers the workpiece in whole or in part. 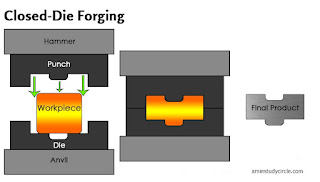 The heated raw material, which is approximately the shape or size of the final forged part, is placed in the bottom die. The shape of the forging is incorporated in the top or bottom die as a negative image.
Modular design
Modular design. or “modularity in design”, is a design approach that subdivides a system into smaller parts called modules or skids, that can be independently created and then used in different systems. Examples of modular systems are cars, computers, process systems. solar panels and wind turbines, elevators and modular buildings.
Recyclability
This term refers to the ability of waste materials to be captured and separated from the waste stream for conversion into a new item or reused in the same capacity.
Flash in forging operation
The formation of metal flash is an important part of impression die-forging manufacture. First, flash provides a way for excess material from the work stock to exit the forging die. If tins material could not escape during the compression the build-up of pressure, as the volume of work metal exceeded the volume of the die cavity, could easily crack the die. Flash, while allowing the material to escape. does increase the pressure within the die cavity. Flash must travel through a narrow passage. called land. before it opens lip into a gutter.
Embossing and coining
String milling
Milling is an important process of manufacturing technology and basically, it refers to the removal of metal from the workpiece using a tool that has several cutting points and is rotating about its axis. String milling is quite similar' to single piece milling but the only difference being that instead of a single piece there are several parts that are simultaneously fixed and are worked upon.
Projection welding
Projection welding is an electric resistance welding process that uses small projections on one or both components of the weld to localize the heat and pressure. By doing so, weld current and force is focused into the small area of the projection, and heat is obtained from the resistance to the flow of the welding current. Due to this heat, the projections collapse and the parts are welded together.
Gang milling
Gang milling is the term applied to an operation in which two or more milling cutters are mounted on the same arbour and used when cutting horizontal surfaces. All cutters may perform the same type of operation or each cutter may perform a different type of operation. 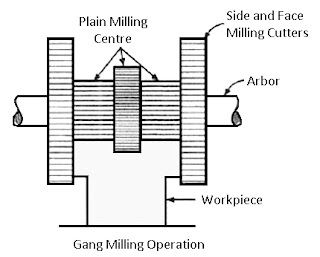 Product life cycle
The product life cycle is an important concept in marketing. It describes the stages a product goes through from when it was first thought of until it finally is removed from the market. Not all products reach this final stage. Some continue to grow and others rise and fall. The main stages of the product life cycle are:
Core baking
After the cores are prepared and placed on a metal plate or core carriers, they are baked to remove the moisture and to develop the strength of the binder in core ovens at temperatures from 150°C to 400°C. depending on the type of binder used, the size of the cores, and the length of baking time.
---
The study material for AMIE/B Tech/Junior Engineer exams is available at https://amiestudycircle.com