A brass plate contains a steel screw and it is being used in a marine environment. Which of the two metals would corrode faster and why?
The steel is on the higher side of the Galvanic series as compared to brass, so it will corrode faster.
What is the weight % of carbon in low carbon steel?
The percentage of carbon in low carbon steel is 0.05 to 0.3.
What is carburizing?
Carburizing is the diffusion or impregnation of carbon on the surface.
Whether duralumin is wrought or cast alloy?
It is a wrought alloy.
Name at least two mechanisms of plastic deformation.
Slip and Twinning. The key difference between slip and twinning is that during a slip, all atoms in a block move the same distance whereas, in twinning, the atoms in each successive plane in a block move through different distances that are proportional to their distance from the twinning plane. 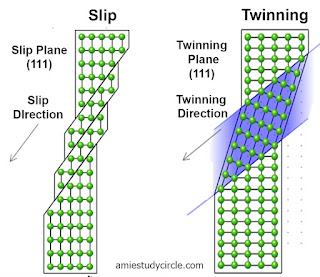 Which of the two main mechanisms of plastic deformation requires greater shear stress to deform.
Slip
If you wound annealed MS and copper wire around your finger one of the two will not form a smooth circular. Which one?
Mild steel
Before cold working of AL alloy, it is heated to about 5840C and then quenched or it should be heated to a lower temperature of 100 to 2000C and then air-cooled?
They are heated to 5840C and quenched
For which type of fracture, the direction of crack propagation is very nearly perpendicular to the direction of applied tensile stress?
Brittle type of fracture. A brittle fracture is the fracture of a metallic object or other material without appreciable prior plastic deformation. It is a break in a brittle piece of metal that failed because stress exceeded cohesion. 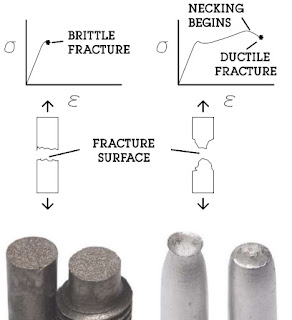