August 05, 2021
Answer all questions
Magnetic moment
The magnetic moment is the magnetic strength and orientation of a magnet or other object that produces a magnetic field. Examples of objects that have magnetic moments include loops of electric current (such as electromagnets), permanent magnets, elementary particles (such as electrons), various molecules, and many astronomical objects (such as many planets, some moons, stars, etc).
Grain growth
Age hardening 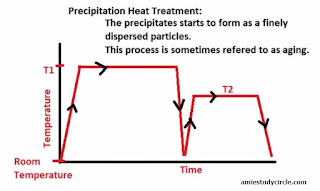 Critical cooling rate
Iron-carbon system
The iron-carbon phase diagram is widely used to understand the different phases of steel and cast iron. Both steel and cast iron are a mix of iron and carbon. Also, both alloys contain a small number of trace elements. See full answer
Work hardening
Work hardening, in metallurgy, increases in hardness of a metal-induced, deliberately or accidentally, by hammering, rolling, drawing, or other physical processes. Although the first few deformations imposed on metal by such treatment weaken it, its strength is increased by continued deformations.
Season cracking
Yield strength
Yield strength refers to an indication of maximum stress that can be developed in a material without causing plastic deformation. It is the stress at which a material exhibits a specified permanent deformation and is a practical approximation of the elastic limit.
Nanomaterial
Susceptibility of paramagnetic magnetic material
Magnetic susceptibility, quantitative measure of the extent to which a material may be magnetized in relation to a given applied magnetic field. The magnetic susceptibility of material, commonly symbolized by Xm, is equal to the ratio of the magnetization M within the material to the applied magnetic field strength H, or Xm = M/H.
---
The study material for AMIE/B Tech/Junior Engineer exams is available at https://amiestudycircle.com