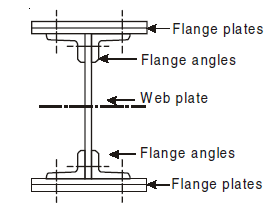 The bearing stiffeners, intermediate stiffeners and horizontal stiffeners used with the plate girder are shown in the following figure.

Compare HSFG bolts and bearing bolts.
The high strength bolts are also called high strength friction grip bolts. Briefly, these are called HSFG bolts. The high strength friction grip bolts have many advantages over rivets.
Discuss Wind load calculation for the design of roof truss.
In order to determine the wind load on roofs and other inclined surfaces, the direction of the wind is assumed as horizontal. The roof surfaces are also inclined to the horizontal. The normal component and tangential component of wind on inclined roof surfaces may be found. It is to note that the tangential component of wind pressure is small and it is neglected. The normal component of wind pressure can be found from the empirical formula.
In order to find the wind load on individual structural elements/members (e.g., roofs and walls, and individual cladding units and their fittings, it is essential to consider the pressure difference between the opposite faces of such elements or units. For cladding, it is, therefore, necessary to know the internal pressure as well as the external pressure. The wind load, WL acting in a direction normal to the individual structural element or cladding unit may be determined from the following expression

where,
Cpe = external pressure coefficient
Cpi = internal pressure coefficient
A = surface area of a structural element or cladding unit, and
pd = design wind pressure
Enlist advantages and disadvantages of Bolted and Welded connections.
The advantages of bolted connections are as follows:
The following are disadvantages of bolted connections:
Advantages of riveted joints
Disadvantages of riveted joints
Kinematic indeterminacy
It is defined as the number of non-zero joint displacements of the structure. It is also called the Degree of freedom.
In short, the total kinematic indeterminacy of a structure represents the sum of all the possible displacements that various joints of a structure can undergo.
---
The study material for AMIE/B Tech/Junior Engineer exams is available at https://amiestudycircle.com
AMIE - Analysis and Design of Structures