Answer briefly on the following

A free-body diagram is a sketch of an object of interest with all the surrounding objects stripped away and all of the forces acting on the body shown. The drawing of a free-body diagram is an important step in the solving of mechanics problems since it helps to visualize all the forces acting on a single object. The net external force acting on the object must be obtained in order to apply Newton's Second Law to the motion of the object. 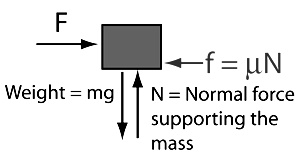 Point load
This type of load acts relatively on a smaller area. For example, the force exerted by a  chair or a table leg on the supporting floor or load exerted by a beam on a supporting column are both considered to be concentrated.

Uniformly Varying Load (UVL)
This type of load will be uniformly varying from zero intensity at one end to the designated intensity at the other end. A triangular block of brickwork practically imposes such loading on a beam. The water pressure distribution on the walls of a water tank could be another example. 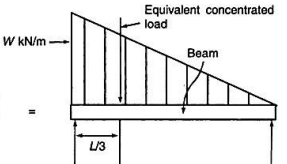 Concentrated Moment
If for some purpose, a beam is to accommodate a load on a bracket mounted on it, what gets transmitted on the beam is a concentrated moment.

BIS is the National Standard Body of India established under the BIS Act 2016 for the harmonious development of the activities of standardization, marking and quality certification of goods and for matters connected therewith or incidental thereto.

Creep
Creep is the tendency of a solid material to move slowly or deform permanently under the influence of persistent mechanical stresses. It can occur as a result of long-term exposure to high levels of stress that are still below the yield strength of the material. Creep is more severe in materials that are subjected to heat for long periods and generally increases as they near their melting point.
Fatigue
Fatigue is the initiation and propagation of cracks in a material due to cyclic loading. Once a fatigue crack has initiated, it grows a small amount with each loading cycle. The crack will continue to grow until it reaches a critical size producing rapid propagation and typically complete fracture of the structure. 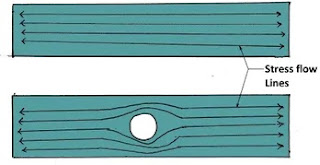 State the efficiency of the screw

The efficiency of a lead screw refers to how well a screw converts rotary energy (torque) into linear motion. Rolling contact has a lower coefficient of friction than sliding contact. Lead screws, including acme screws, offer efficiency levels of between 20 per cent and 80 per cent.

Following are the two types of rolling contact bearings: 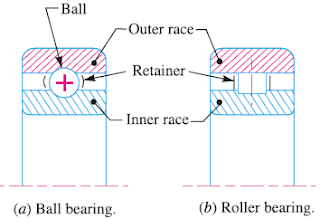 The ball and roller bearings consist of an inner race which is mounted on the shaft or journal
and an outer race which is carried by the housing or casing.
The rolling contact bearings, depending upon the load to be carried, are classified as

The gears may be manufactured from metallic or non-metallic materials. The metallic gears with cut teeth are commercially obtainable in cast iron, steel and bronze. Nonmetallic materials like wood, rawhide, compressed paper and synthetic resins like nylon are used for gears, especially for reducing noise.

A key is a piece of mild steel inserted between the shaft and hub or boss of the pulley to connect these together in order to prevent relative motion between them. It is always inserted parallel to the axis of the shaft. Keys are used as temporary fastenings and are subjected to considerable crushing and shearing stresses. A keyway is a slot or recess in a shaft and hub of the pulley to accommodate a key.
---
The study material for AMIE/B Tech/Junior Engineer exams is available at https://amiestudycircle.com
AMIE - Design of Machine Elements