Explain the following in brief (20 marks)

BIS is the National Standard Body of India established under the BIS Act 2016 for the harmonious development of the activities of standardization, marking and quality certification of goods and for matters connected therewith or incidental thereto.

The factor of safety and allowable stress

In a large number of applications, the external force acting on the spring fluctuates with respect to time resulting in fatigue failure. Due to the poor surface finish of the spring wire, the fatigue crack usually begins with some surface irregularity and propagates due to tensile stresses. It has been observed that the propagation of fatigue crack is always due to tensile stresses.
In order to reduce the chances of crack propagation, a layer of residual compressive stress is induced on the surface of the spring wire. One of the methods of creating such a layer is shot peening. In this process, small steel balls arc impinged on the wire surface with high velocities cither by an air blast or by centrifugal action. The balls strike against the wire surface and induce residual compressive stresses. 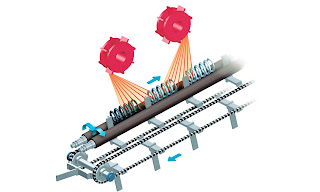 The laminated or leaf spring (also known as flat spring or carriage spring) consists of a number of flat plates (known as leaves) of varying lengths held together by means of clamps and bolts, as shown in the figure.
These are mostly used in automobiles. The major stresses produced in leaf springs are tensile and compressive stresses.

Forces acting the key are shown below 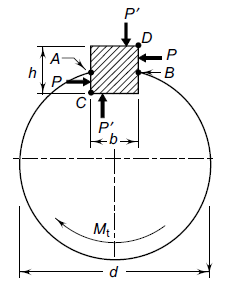 where
Mt = transmitted torque (N-mm)
d = shaft diameter (mm)
P = force on key (N)
The design of square or flat key is based on two criteria, viz., failure due to shear stress and failure due to compressive stress. The shear stress 𝛕 in the plane AB is given by,