Answer the following (10 x 2)
State the conditions for a stable determinate structure.
When do you go for the method of sections?
State the concepts involved in the conjugate-beam method.
The conjugate beam method is a method for determining slopes and deflections in beams. The method can also be conveniently used for continuous beams. This method is based on a mathematical correspondence that exists between moment vs. load function and deflection vs. M/EI functions in a
beam. The following figure shows these relations. 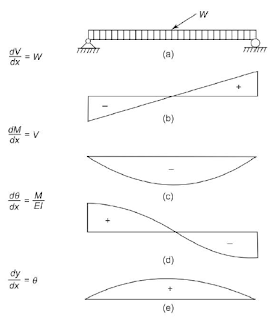 Theorems
What are the uses of influence line diagrams?
The steps involved in determining S.F. and B.M. at different sections of a beam as the rolling loads move from one end to the other are rather cumbersome. Influence lines are interesting and are a very useful tool in dealing with rolling loads.
Definition
An influence line is defined as a function whose value at a point represents some structural quantity as a unit load is placed at that point.
Uses of Influence Lines diagrams
When do you expect sway in frames?
in frames, the translation of some joints is common due to forces acting in the lateral direction as in Fig. (a) or due to asymmetrical forces as in Fig.(b) or due to asymmetry in the make-up of the frame even though the load is symmetrical as in Figs. (c and d). 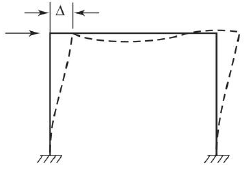 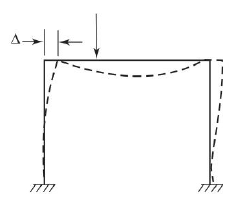 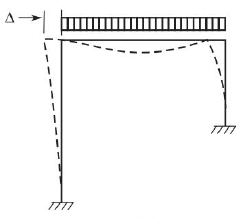 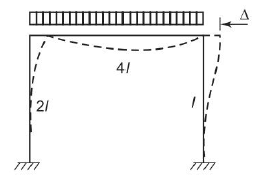 What is the type of connections used in steel structures?
The various types of connections used for connecting the structural members are given below :
These connections are named after the type of fastening (viz., rivets, bolts and nuts, pins and welds) used for connecting the structural members
What is the difference in the design methodology of tension and compression members?
Compression members
Tension members
What are the loads to be considered in the design of Gantry Girders?
Type of Load on Gantry Gutter 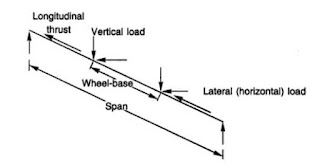 Write a brief note on the design of R.C. slabs.
One way slab
For design purposes, a strip (beam) of unit width along the supported edge in (i) or along the shorter span in (ii) is considered for analysis of bending moment and shear forces.
Two-way slab
The design load on any point (i.e. on any common unit area crossed by two mutually perpendicular strips of unit width) is shared by both the spans. A two-way slab depending on the support conditions may be either of the following types :
How will you design a footing?
The following steps are followed:
---
The study material for AMIE/B Tech/Junior Engineer exams is available at https://amiestudycircle.com
AMIE - Analysis and Design of Structures