Multiple choice questions choose the correct answer (20 marks)
1. Measurement of temperature is based on ⸺
(a) thermodynamic properties
(b) zeroth law of thermodynamics
(c) the first law of thermodynamics
(d) the second law of thermodynamics
2. Carnot cycle efficiency depends upon ⸺
(a) properties of the medium/substance use
(b) condition of engine
(c) working condition
(d) temperature range of operation
3. In a Rankine Cycle, heat output is obtained from
(a) Condenser
(b) Boiler
(c) Turbine
(d) Pump
4. The ideal gas-refrigeration cycle is similar to
(a) Brayton cycle
(b) Reversed Brayton cycle
(c) Rankine cycle
(d) Reversed Rankine cycle
5. When humidity ratio of air------air is said to be dehumidified.
(a) increases
(b) decreases
(c) remains constant
(d) None of the mentioned
6. Heat transfer deals with the rate of
(a) work transfer
(b) temperature transfer
(c) energy transfer
(d) None of the above
7. Aluminium is used as a fin material because
(a) it has a higher convection heat transfer coefficient
(b) it has a lower convection heat transfer coefficient
(c) it has a higher thermal conductivity
(d) it has a lower thermal conductivity
8. How many types of convection are there?
(a) 4
(b) 3
(c) 2
(d) 1
9. Unit of thermal diffusivity is
(a) m²/hr
(b) m²/hr °C
(c) kcal/m² hr
(d) kcal'm².hr°C
10. A perfect black body is one which
(a) is black in colour
(b) Reflects all heat
(c) Transmits all heat radiations
(d) Absorbs heat radiations of all wavelengths falling on it
Answers
1. (b) The zeroth law of thermodynamics provides the basis for the measurement of temperature. It enables us to compare temperatures of two bodies ‘1’ and ‘2’ with the help of a third body ‘3’ and say that the temperature of T’ is the same as the temperature of ‘2’ without actually bringing 1’ and ‘2’ in thermal contact. In practice, body ‘3’ in the zeroth law is called the thermometer. It is brought into thermal equilibrium with a set of the standard temperatures of a body ‘2’ and is thus calibrated. Later, when any other body ‘1’ is brought in thermal communication with the thermometer, we say that the body ‘1’ has attained equality of temperature with the thermometer, and hence with body ‘2’. This way, body ‘1’ has the temperature of body ‘2’ given for example by, say the height of the mercury column in the thermometer ‘3’.
2. (d) 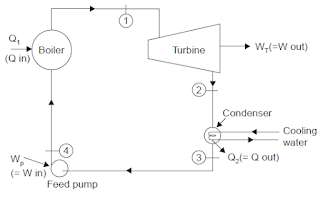 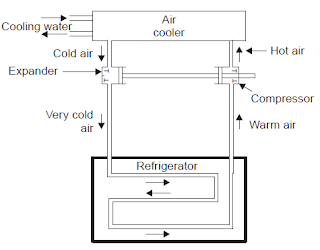 Air refrigeration cycle
5.  (b) It is the ratio of the mass of water vapour per unit mass of dry air in the mixture of vapour and air, it is generally expressed as grams of water per kg of dry air.
6. (c)
7. (c) Aluminium is one of the most frequently used materials for fin due to its higher thermal conductivity and comparatively low cost.
8. (b)
9. (a)