1. The fin efficiency is defined as the ratio of the actual heat transfer from the fin to
(a) The heat transfer from the same fin with an adiabatic tip.
(b) The heat transfer from an equivalent fin which is infinitely long.
(c) The heat transfer from the same fin if the temperature along the entire length of the fin is the same as the base temperature.
(d) None of the above.
2. A cylindrical pin fin of diameter 0.6 cm and length of .3 cm with negligible heat loss from the tip has an efficiency of 0.7. The effectiveness of the fin is
(a) 0.3
(b) 0.7
(c) 2
(d) 8
(e) 14
3. For the same initial conditions, one can expect the laminar thermal and momentum boundary layers on a flat plate to have the same thickness when the Prandtl number of the flowing fluid is
(a) close to zero
(b) small
(c) approximately one
(d) large
(e) very large
4. The transition from laminar flow to turbulent flow in a forced convection situation is determined by which one of the following dimensionless numbers?
(a) Grashoff
(b) Nusselt
(c) Reynolds
(d) Stanton
(e) Mach
5. In any forced or natural convection situation, the velocity of the flowing fluid is zero where the fluid wets any stationary surface. The magnitude of heat flux where the fluid wets a stationary' surface is given by
(a)

(e) None of the above
6. The primary driving force for natural convection is
(a) shear stress force
(b) buoyancy three
(c) pressure forces
(d) surface tension forces
(e) None of them
7. In a parallel flow heat exchanger, the NTU is calculated to be 2.5. The lowest possible effectiveness for this heat exchanger is
(a) 19%
(b) 27%
(c) 41%
(d) 50%
(e) 92%
8. Heat transfer from higher temperature to lower temperature takes place according to
(a) Fourier law
(b) First law of thermodynamics
(c) Second law of thermodynamics
(d) Zeroth law of thermodynamics
9. The number of view factors that need to be evaluated directly for a 10 surface enclosure is
(a) 1
(b) 10
(c) 22
(d) 34
(e) 45
10. Heat transfer coefficients for a vapour condensing on a surface can be increased by promoting
(a) Film condensation
(b) dropwise condensation
(c) rolling action
(d) None of them
11. For a reversible, adiabatic process, the change in entropy is
(a) zero
(b) minimum
(c) maximum
(d) infinite
(e) unity
12. Kelvin-Planck’s law deals with
(a) conservation of energy
(b) conservation of heat
(c) conservation of mass
(d) conversion of heat into work
(e) conversion of work into heat
13. The efficiency of an ideal Carnot engine depends on
(a) working substance
(b) on the temperature of the source only
(c) on the temperature of the sink only
(d) on the temperature of the source and sink
(e) on the construction of the engine
14. Rankine cycle efficiency of a good steam power plant may be in the range of
(a) 15 to 20%
(b) 35 to 45%
(c) 70 to 80%
(d) 90 to 95%
15. The air standard efficiency of the Otto cycle is given by
(a)

16. The thermal efficiency of the petrol engine as compared to the diesel engine is
(a) lower
(b) higher
(c) same for same power output
(d) same for the same speed
17. The fuel-air ratio for a maximum power of S.I. engine should be
(a) lean
(b) rich
(c) maybe lean or rich
(d) chemically correct
18. The main cause of irreversibility is
(a) mechanical and fluid friction
(b) unrestricted expansion
(c) heat transfer with finite temperature difference
(d) All of the above
19. Thermal efficiency of closed-cycle gas turbine plant increases by
(a) reheating
(b) inter cooling
(c) regenerator
(d) All of the above
20. Mechanical efficiency of a gas turbine as compared to internal combustion reciprocating engine is
(a) higher
(b) lower
(c) same
(d) unpredictable
Answers
1. (c) Fin efficiency is defined as actual heat transfer/heat which would be transferred if the entire fin area were at base temperature
2. (e) We know that

So we get ε = 14.
3. (c)
4. (c) The insulating film will be relatively thin toward the leading edge of the surface
resulting in a relatively high convection coefficient. At a Rayleigh number of about 10⁹, the flow over a flat plate will transition to a turbulent pattern. The increased
turbulence inside the boundary layer will enhance heat transfer leading to relative high convection coefficients, much like forced convection. 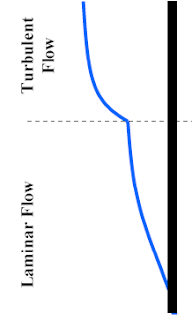 5. (b)
6. (b) Buoyancy is what drives natural convection, where the pressure differential between air heated by heat sources and surrounding ambient air drives the hot air upwards and away from the heat source. The air rises up with the energy it absorbed and thus removes that energy from the area around the heat sources. Cooler ambient air then moves in and replaces the heated air that moved up. This rising and replacement of hot and cool air generate a consistent flow without the need for any active mechanisms to drive it.
7. (d) We know that

8. (c) According to the second law, it is impossible to construct a device that, operating in a cycle, will produce no effect other than the transfer of heat from a cooler to a hotter body. Heat cannot flow itself from a body at a lower temperature to a body at a higher temperature. Some work must be expended to achieve this.
9. (e) For the n-surface enclosure, if nC2 view factors are known directly, the entire enclosure can be solved. Thus for 10 surfaces, the number of view factors that need to be evaluated directly will be

dS is entropy change.
12. (d) The Kelvin Planck statement of the second law states: It is impossible for a heat engine to produce net-work in a complete cycle if it exchanges heat only with bodies at a single fixed temperature.
13. (d) Carrot theorem states that of all engines operating between a given constant temperature source and a given constant temperature sink, none has a higher efficiency than a reversible engine. 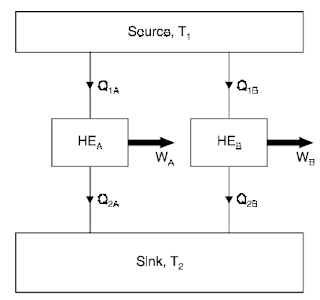 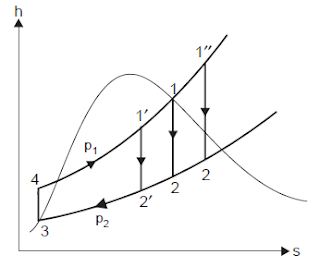 15. (b) Otto cycle is so named as it was conceived by ‘Otto’. In this cycle, petrol, gas and many
types of oil engines work. It is the standard of comparison for internal combustion engines. Figs. (a) and (b) shows the theoretical p-V diagram and T-s diagrams of this cycle respectively. 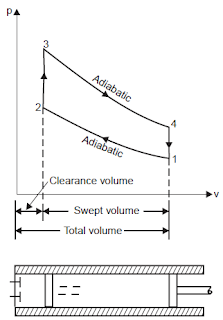 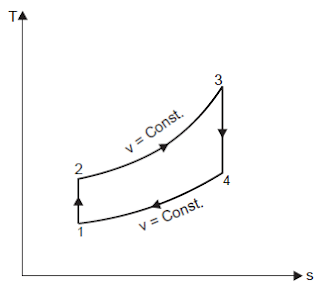 (b)
16. (a)
17. (b)
18. (d)  The irreversibility is the characteristic of the system which forbids the system from retracing the same path upon reversal of the factors causing the state change. Thus, irreversible systems are those
which do not maintain equilibrium during the occurrence of a process. Various factors responsible for
the nonattainment of equilibrium are generally the reasons responsible for irreversibility. The presence of friction, dissipative effects etc. has been identified as a few of the prominent reasons for irreversibility.
19. (c) The thermal efficiency of gas turbine power plant may be increased by regeneration, reheat and intercooling Regeneration can be seen in the feed water heating as the bled steam gets mixed with feed water at state thus resulting in hot feed water. the bleeding offers an advantage in terms of increased cycle efficiency due to the increased mean temperature of heat addition. Hotter feed water also offers an advantage in terms of reduced thermal stresses in the boiler due to reduced temperature difference and less tendency of condensation of sulphur dioxide. Bleeding of steam causes reduced mass flow in condenser thereby reducing the size of condenser.
20. (a) The gas turbine is most efficient at maximum power output in the same way reciprocating engines are most efficient at maximum load. The difference is that at lower rotational speed the pressure of the compressed airdrops and thus thermal and fuel efficiency drop dramatically.
---
The study material for AMIE/B Tech/Junior Engineer exams is available at https://amiestudycircle.com
AMIE - Thermal Science & Engineering