November 30, 2021
Choose the correct answer: (1 x 20)
1. Which one of the following represents an open thermodynamics system?
(a) Manual ice cream freezer
(b) Centrifugal pump
(c) Pressure cooker
(d) Bomb calorimeter
2. A small container has gas at a higher pressure. It is placed in an evacuated space. If the container is punctured, work done by the gas is
(a) Positive
(b) Negative
(c) Zero
(d) infinite
3. The transition from laminar flow to turbulent flow in a forced convection situation is determined by which one of the following dimensionless numbers?
(a) Grashoff
(b) Nusselt
(c) Reynolds
(d) Stanton
(e) Mach
4. Air is at 15 °C is compressed steadily and isothermally from 100 kPa to 700 kPa at a rate of 0.12 kgs. The minimum power input to the compressor is
(a) 11.2 kW
(b) 25.8 kW
(c) 19.3 kW
(d) 161 kW
5. Heat cannot be transported from a low-temperature reservoir to a high-temperature reservoir without the aid of external work input. This is
(a) Kelvin Planck statement
(b) Carnot theorem
(c) Joule law
(d) Clausius statement
6. The efficiency of the Carnot cycle heat engine will be 100% if
(a) It operates at an infinitely high speed
(b) It operates with perfect gas as a working fluid
(c) Its sink temperature is 0 K while the source is at any finite temperature
(d) Its sink is at 0 °C and the source at 1000 K
7. Entropy is a
(a) Path function
(b) Point function
(c) Property independent function
(d) Neither path nor point function
8. The difference in availability of a system between two states is
(a) Work done by the system
(b) Heat input to the system
(c) Maximum possible work output from the prescribed changes of states
(d) Energy
9. For the same compression ratio and heat input for the Otto cycle
(a) Peak temperature is greater than diesel
(b) Heat rejection is lower
(c) Expansion ratio is less than diesel
(d) Temperature at the end of compression is greater than diesel
10. Which temperature is most different from the outside temperature as measured with a conventional thermometer?
(a) Wet bulb temperature
(b) Dry bulb temperature
(c) Dew point temperature
(d) Ambient temperature
11. The temperature gradient in an insulating material is
(a) Greater than in a conductor
(b) Less than in a conductor
(c) Equal to that in a conductor
(d) Zero
12. At what temperature will the Celsius and Fahrenheit scales read the same?
(a) - 40 °C
(b) + 14 °C
(c) - 25 °C
(d) + 25 °C
13. The convection heat transfer coefficient of a fluid depends on
(a) Thermal conductivity
(b) Fluid properties
(c) Fluid velocity
(d) All the above
14. The emissivity of the real surface is always
(a) Greater than unity
(b) Equal to unity
(c) Less than unity
(d) Less than or greater than unity
15. The three-dimensional unsteady state conduction equation without internal heat generation is known as the equation is
(a) Laplace
(b) Fourier
(c) Poisson
(d) Momentum
16. In free convection, the product of Grashof and Prandtl numbers appears often and it is called the
(a) Nusselet number
(b) Reynolds number
(c) Kirchoff number
(d) Rayleigh number
17. The hydrodynamic boundary layer thickness is defined when local velocity within the boundary layer is — times the free stream velocity of the fluid.
(a) 0.99
(b) 0.95
(c) 0.93
(d) 0.90
18. The increased surface roughness can cause a large increase in heat flux for the ⸺ regime.
(a) Free convection boiling
(b) Nucleate boiling
(c) Film boiling
(d) All of the above
19. In a parallel flow heat exchanger, both hot and cold fluid will
(a) Enter at one side and leave at the other side parallel to each other
(b) Enter from opposite sides parallel to each other
(c) Enter at perpendicular directions to each other
(d) All of the above
20. The total emissive power (kW/m²) of a black body at 1000 K
(a) 5669
(b) 56.99
(c) 569.9
(d) 5.699
Answers
1. (b) Since the centrifugal pump is a device in which one side is for an inlet and another one is for an outlet. An open device is a system in which energy and mass can enter from one side and can exit from another side i.e mass and energy both can transfer. In a centrifugal pump, fluid enters with low energy and low head while discharging from the pump at high energy and high head.
2. (c) The work done during the free expansion of an ideal gas is always zero when the process is irreversible. The internal energy for an ideal gas is dependent only on the temperature.
3. (c)
4. (c)

5. (d) Clausius statement: “It is impossible to construct a device which operates in a cyclic  process and produces no effect other than transfer heat from one reservoir at low   temperature to another reservoir at high temperature.” Clausius statement points out the essence of work input required in refrigeration and heat pumps. To transfer heat from a body at a lower temperature to a body at a higher temperature external work is required. Thus in the above figure left part is possible while on the right   is not possible 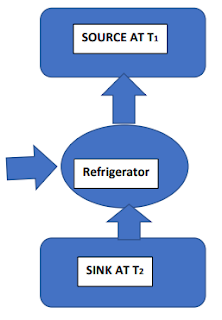 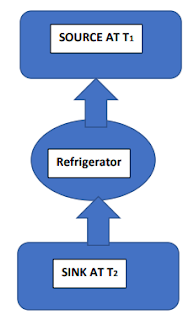 If T₂ = 0 K then η = 0.
7. (c) Path function
8. (c) The availability of a given system is defined as the maximum useful work that can be obtained in a process in which the system comes to equilibrium with the surroundings or attains the dead state.
9. (b)
10. (a) When it's dry-bulb temperature, it's the normal temperature of the air around the thermometer. When want to measure wet bulb temperature, we need to saturate the air around the bulb with water vapour. To do that we wrap a wet cotton wigg around the bulb so that when evaporation of water from the wet cotton starts it will completely saturate the air around the bulb, now the measured temperature is the wet-bulb temperature.  Wet-bulb temperature is always lower than dry bulb temperature.
11. (d) Insulation is a general term used to describe products that reduce heat loss or heat gain by providing a barrier between areas that are significantly different in temperature. The material used for insulation is a bad conductor of heat . So that it will not conduct the heat and the temperature remains constant . That's why heat flux and thermal gradient are zero at the region of insulation.
12. (a) °C=(°F−32) x 5/9
13. (d)
14. (c) Emissivity is defined as the ratio of the energy radiated from a material's surface to that radiated from a perfect emitter, known as a blackbody, at the same temperature and wavelength and under the same viewing conditions. It is a dimensionless number between 0 (for a perfect reflector) and 1 (for a perfect emitter).
15. (c)
16. (d) The Rayleigh number is defined as the product of the Grashof number, which describes the relationship between buoyancy and viscosity within a fluid, and the Prandtl number, which describes the relationship between momentum diffusivity and thermal diffusivity.
17. (a) Hydrodynamic boundary layer thickness is defined as the distance measured in the y-direction from boundary to the point where the velocity is 99% of the free stream velocity. 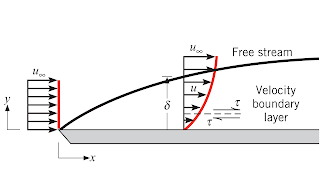 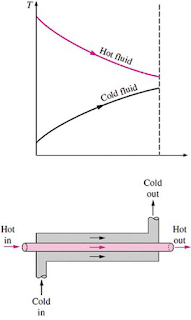 Parallel flow
In counter flow, the hot and cold fluids enter the heat exchanger at opposite end and flow in opposite direction, as shown in figure. 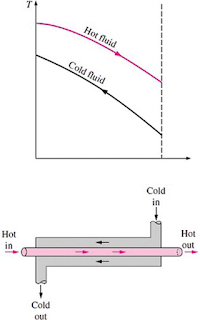