Write a short note on any four.
Natural Convection Vs Forced convection
Clapeyran equation
Clausius-Claperyon equation is a relationship between the saturation pressure, temperature, the enthalpy of evaporation, and the specific volume of the two phases involved. This equation provides a basis for calculations of properties hi a two-phase region.

Logarithmic Mean Temperature Difference for “Counter-flow”
Refer to the following figure, which shows the flow arrangement and temperature distribution in a single pass counter-flow heat exchanger. 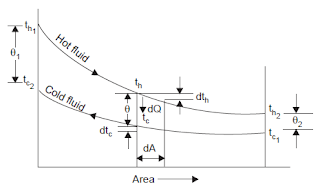 For a parallel-flow heat exchanger

for a counterflow heat exchanger

Kirchoff Law
Kirchhoff's Law:  The law states that at any temperature the ratio of total emissive power E to the total absorptivity a is a constant foi~ all substances that are in thermal equilibrium, with their environment. 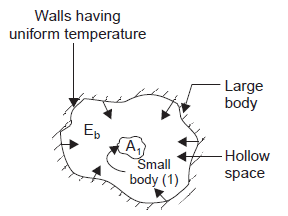 Eb = E/ε
where E is emissive power and ε is emissivity. Eb is energy fall on the surface.
Thus, Kirchhoff's law also states that the emissivity of a body is equal to its absorptivity when the body remains in thermal equilibrium with its surroundings.
Condensation and boiling
Boiling, evaporation and condensation are terms that refer to the changes in state between liquids and gases:
The boiling curve is shown below. 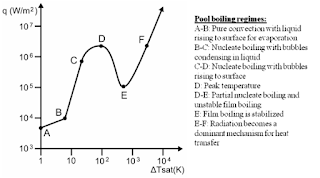 Condensation is shown below. 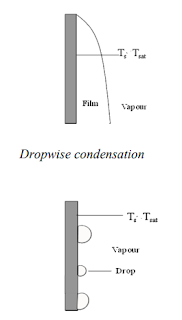 Heat transfer rates in dropwise condensation may be as much as 10 times higher than in film condensation.
---
The study material for AMIE/B Tech/Junior Engineer exams is available at https://amiestudycircle.com
AMIE - Thermal Science & Engineering