December 08, 2021
1. The dimension of strain is
(a) LT-2
(d) N/m2
(c) N
(d) Dimensionless
2. The lateral strain is
(a) The ratio of axial deformation to the original length
(b) The ratio of deformation in the area to the original area
(c) The strain at right angles to the direction of applied load
(d) The ratio of the length of the body to the tensile force applied to it
3. Some structural members subjected to a long time sustained loads deform progressively with time especially at elevated temperatures. What is such a phenomenon called?
(a) Fatigue
(b) Creep
(c) Creep relaxation
(d) Fracture
4. The property by which a body returns to its original shape after removal of the force is called
(a) Plasticity
(b) Elasticity
(c) Ductility
(d) Malleability
5. The property of a material by which it can be beaten or rolled into thin plates is called
(a) Malleability
(b) Plasticity
(c) Ductility
(d) Elasticity
6. The stress at which extension of a material takes place more quickly as compared to the increase in load is called
(a) Elastic point
(b) Plastic point
(c) Breaking point
(d) Yielding point
7. Which point on the stress-strain curve occurs after the proportionality limit?
(a) Upper yield point
(b) Lower yield point
(c) Elastic limit
(d) Ultimate point
8. Where is the necking region?
(a) The area between lower yield point and upper yield point
(b) The area between the plastic limit and elastic limit
(c) The area between the ultimate point and initial point
(d) The area between the ultimate point and rapture
9. Hogging is
(a) Negative bending moment
(b) Positive shear force
(c) Positive bending moment
(d) Negative shear force
10. At the point of contraflexure the value of bending moment is
(a) Zero
(b) Maximum
(c) Can’t be determined
(d) Minimum
Answers
1. (d) When a body is subjected to some external force, there is some change of dimension of the body. The ratio of change of dimension of the body to the original dimension is known as strain. Strain is dimensionless.
2. (c) The strain at right angles to the direction of applied load is known as lateral strain. Every direct stress is always accompanied by a strain in its own direction and an opposite kind of strain in every direction at right angles to it. Such a strain is known as secondary or lateral strain.
3. (b) Creep is the tendency of a solid material to move slowly or deform permanently under the influence of persistent mechanical stresses. It can occur as a result of long-term exposure to high levels of stress that are still below the yield strength of the material.
4. (b) When an external force acts on a body, the body tends to undergo some deformation. If the external force is removed and the body comes back to its original shape and size (which means the deformation disappears completely), the body is known as an elastic body.
5. (a) Malleability is the property of a material by which it can withstand deformation under compression without rupture.
6. (d) We see, from the graph, that the curve from O to A is a straight line, which represents that the stress is proportional to strain. Beyond A, the curve slightly deviates from the straight. It is thus obvious, that Hooke’s law holds good only up to this limit. Thus the point A is the elastic limit of the specimen metal. When the specimen is stressed beyond this limit, the strain increases more quickly than the stress (in comparison from O to A). This happens, because a sudden elongation of the specimen takes place, without an appreciable increase in the stress (or load). The stress, corresponding to point B is called the yield point. It may be noted, that if the load on the specimen is removed, then the elongation from A to B will not disappear. But will remain as a permanent set. It is thus obvious, that Hooke’s law does not hold good, beyond point A (i.e., elastic limit). 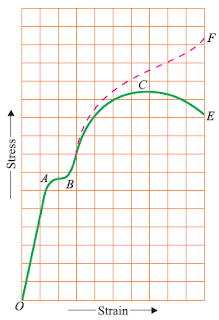 7. (c) The curve will be stress-strain proportional up to the proportionality limit. After these, the elastic limit will occur.
8. (d) When the tensile stress is increased beyond the ultimate tensile strength value, a neck is formed somewhere near the middle of the specimen. This process of formation of the Neck is called Necking. 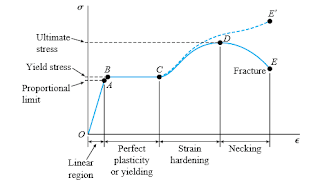 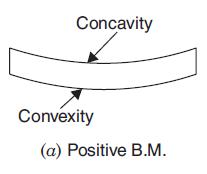 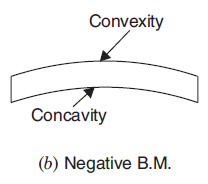 The positive B.M. is often called a sagging moment and the negative B.M. is a hogging moment.
10. (a) Point of Contraflexure. It is the point where the B.M. is zero after changing its sign from positive to negative or vice versa.

---
The study material for AMIE/B Tech/Junior Engineer exams is available at https://amiestudycircle.com
AMIE - Mechanics of Solids