1. In the tension test the specimen is subjected to tensile load. The maximum shear stress occurs at an angle with the axis of the specimen
(a) 45°
(b) 60°
(c) 90°
(d) 180°
2. The fatigue failure of the specimen occurs most importantly due to
(a) High value of alternating stress
(b) A large number of cycles
(c) Propagation of internal crack
(d) None of the above
3. Total elongation produced in a bar due to its self-weight is given by
(a) gρl2/E
(b) gρl2/2E
(c) gpl/E
(d) gpl/2E
4. Which of the following is the statically indeterminate structure
(a) Cantilever beam
(b) Simply supported beam
(c) Fixed-beam
(d) None of the above
5. The strength of the beam mainly depends on
(a) Bending moment
(b) C. G of the section
(c) Section Modulus
(d) Weight
6. In a thick cylinder subjected to internal pressure the radial stress at the outer surface is
(a) Always more than zero
(b) Always less than zero
(c) Usually equal to zero
(d) None of the above
7. In the case of a hollow shaft the average torsional energy per unit volume is given by
(a)

8. An open coiled helical spring subjected to axial load causes
(a) Tensile stress only
(b) Shear stress only
(c) Bending stress only
(d) Shear and Bending stresses
9. The ratio of the maximum circumferential stress in a circular rotating disk having a very small hole at the centre to maximum circumferential stress in a solid circular disk is
(a) 1.2
(b) 1.5
(c) 2.0
(d) 3
10. If a be the proof stress or maximum stress to which the bar is stressed up to an elastic limit, modulus of resilience is equal to
(a) σ/2E
(b) σ²/2E
(c) σ²/4E
(d) σ/4E
Answers
1. (a) Maximum Shear stress at 45 degrees only applies in uniaxial tension.
2. (b) Fatigue failure is the formation and propagation of cracks due to a repetitive or cyclic load. Most fatigue failures are caused by cyclic loads significantly below the loads that would result in the yielding of the material. The failure occurs due to the cyclic nature of the load which causes microscopic material imperfections (flaws) to grow into a macroscopic crack (initiation phase). The crack can then propagate to a critical size that results in structural or pressure boundary failure of the component.
3. (d)

4. (c) A fixed beam is supported between two fixed ends. It is also called fixed-end beam or built-in beam or restrained beam. It is classified as a statically indeterminate beam, which involves more than three unknowns and the equilibrium equations of statics alone are not sufficient to determine the support reactions. It involves four unknowns and requires consideration of the deflection of the beam to find the additional unknown. 5. (c) The strength of the beam mainly depends upon the section modulus of the beam. The ratio of moment of inertia of a section about the neutral axis to the distance of the outermost layer from the neutral axis is known as section modulus. It is denoted by Z = I/ymax
6. (c) The radial stress for a thick-walled cylinder is equal and opposite to the gauge pressure on the inside surface, and zero on the outside surface. The circumferential stress and longitudinal stresses are usually much larger for pressure vessels, and so for thin-walled instances, radial stress is usually neglected.
7. (a) 8. (a) Open Coiled Helical Springs: These helical springs are designed to resist compression, which is they are known as compression springs. 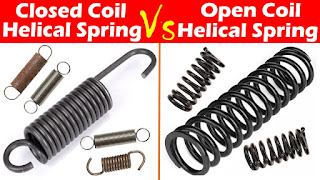 10. (b) The maximum energy stored in the body without permanent deformation (i.e., up to elastic limit) is known as proof resilience.
Modulus of resilience = Strain energy per unit volume
= total strain energy/volume
=

---
The study material for AMIE/B Tech/Junior Engineer exams is available at https://amiestudycircle.com
AMIE - Mechanics of Solids