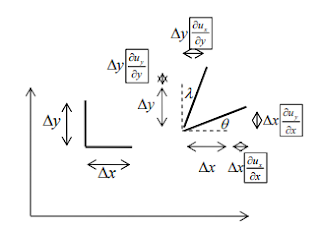 For the failure of the material

For design, the following equation should be used

The capacity of a material to resist or absorb shock energy before it fractures is called its impact strength. The standard machine for impact testing is of the pendulum type (see figure). 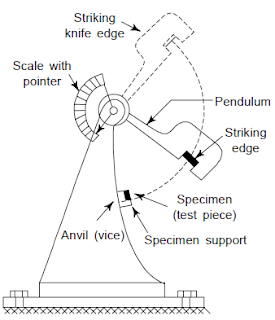 A notch is cut in the specimen, i.e. a standard test piece which struck under impact conditions by a heavyweight attached to the end of the pendulum. The test piece, i.e. specimen is held in an anvil (vice) and is broken by a single blow of the pendulum weight or hammer which is allowed to fall from a fixed starting point of a known height. The pendulum swings on after breaking the specimen and the height to which the pendulum rises on the other side are measured.

This is essentially the resistance of the surface of a material to deformation. We may note that there is no absolute scale for hardness. The commonly used tests for hardness are:
Brinell Hardness Test
Ill this test a standard hardened steel ball of diameter D is pressed for about 10-15 seconds into the surface of the specimen by a gradually applied load P (see figure). 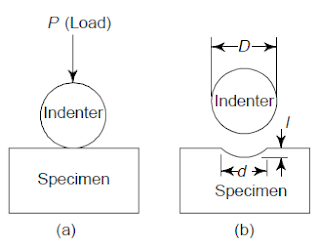 The diameter of the indentation is measured after the load and ball are removed. The impression of the steel ball (indenter) so obtained, is measured to the nearest 0.2 mm with the help of a microscope.
The BHN number for some metals are
Lead: 4-8
Zinc: 25-40
Cast iron: 115-200
Nickel: 30-160
H.S.S.: 450-700
---
The study material for AMIE/B Tech/Junior Engineer exams is available at https://amiestudycircle.com
AMIE - Mechanics of Solids