Answer the following (2 marks each)

What is Mohr’s circle? 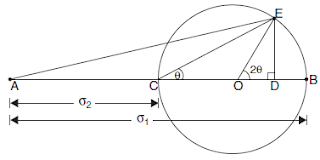 What is a Poisson’s ratio?

Poisson’s ratio.  The ratio of lateral strain to the longitudinal strain is a constant for a given material, when the material is stressed within the elastic limit. This ratio is called Poisson’s ratio and it is generally denoted by μ.

State the principle of shear stress.

Shear Stress. The stress induced in a body, when subjected to two equal and opposite forces which are acting tangentially across the resisting section as shown in following figure as a result of which the body tends to shear off across the section, is known as shear stress. 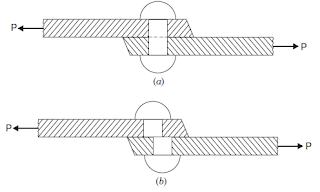 The corresponding strain is known as shear strain. The shear stress is the stress which acts tangential to the area. It is represented by τ.

What is proof resilience?

The product of the area (or mass) and the square of the distance of the centre of gravity of the area (or mass) from an axis perpendicular to the plane of the area is known as polar moment of inertia and is represented by J.
Consider a plane area which is split up into small areas a1, a2, a3, ... etc. Let the C.G. of the small areas from a given axis be at a distance of r1, r2, r3, ... etc. Then the moment of inertia of the plane area about the given axis is given by

If tensile force is applied to a steel bar, it will have some elongation. If the force is small enough, the ratio of the stress and strain will remain proportional. This can be seen in the graph as a straight line between zero and point A – also called the limit of proportionality. If the force is greater, the material will experience elastic deformation, but the ratio of stress and strain will not be proportional. This is between points A and B, known as the elastic limit. 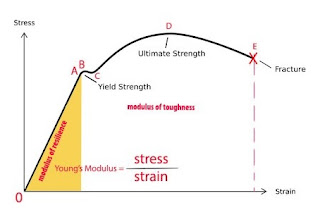 Beyond the elastic limit, the mild steel will experience plastic deformation. This starts the yield point – or the rolling point – which is point B, or the upper yield point. As seen in the graph, from this point on the correlation between the stress and strain is no longer on a straight trajectory. It curves from point C (lower yield point), to D (maximum ultimate stress), ending at E (fracture stress).