When a closed traverse is plotted from the field measurements, the end station of a traverse generally does not coincide exactly with its starting station. This discrepancy is due to the errors in the field observations i.e. magnetic bearings and linear distances. Such an error of the traverse is known as a closing error or an error of closure.

When the angular and linear measurements are of equal precision, graphical adjustment of the traverse may be made. This method is based on Bowditch’s rule. Corrections are applied to lengths as well as to bearings of the lines in proportion to their lengths.

Let l = length of any leg

δL = correction to the latitude of the leg

δD = correction to the departure of the leg

Then as per Bowditch’s rule

A curve that consists of two opposite circular arcs of the same or different radii, is known as a reverse curve. In such curves, the centres of the arcs are on the opposite sides of the curve. The two arcs turn in opposite directions with a common tangent at the junction of the two arcs. 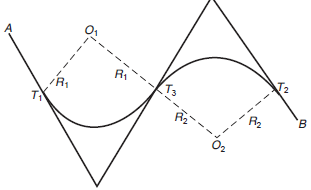 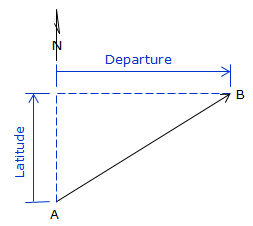 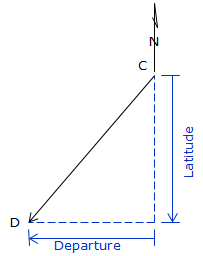 There are two methods of observation in trigonometric levelling.

The adjustments of a theodolite are of two kinds :

The adjustments which are required to be made at every instrument station before making observations are known as temporary adjustments.

The temporary adjustments of a theodolite include the following :

Various types of obstacles generally met during chaining, may be overcome by any one of the following methods.

Obstacles to chaining are of the following types:

When intermediate ranging rods are fixed along the chain line, by direct observation from either end station, the process is known as ‘Direct Ranging’.

Following steps are taken in the direct range:

Local Attraction and its detection

The North end of a freely suspended magnetic needle always points to the magnetic north, if it is not influenced by any other external forces except the earth’s magnetic field. It is a common experience that the magnetic needle gets deflected from its normal position if placed near magnetic rocks, iron ores, cables carrying current or iron electric poles.

Such a disturbing force is known as ‘Local attraction’. Magnetic bearings are, therefore, not reliable unless these are checked against the presence of local attractions at each station and their elimination.

It may be noted that local attraction at any station affects all the magnetic bearings by an equal amount and hence, the included angles deduced from the affected bearings are always correct. In case, the fore
and back bearings of neither line of a traverse differ by the permissible error of reading, the mean value of the bearings of the line least affected may be accepted. The correction to other stations may be made according to the following methods.
---
AMIE - Principles of Geoinformatics Civil - Surveying (Geoinformatics)