Differentiate between the following (2x 10)

Permanent Bench Marks  These bench marks are established between G.T.S. bench marks by the Survey of India or other government agencies such as P.W.D., on clearly defined and permanent natural or cultural detail points such as isolated rocks culverts, kilometre stones, railway platforms, gate pillars of inspections houses, etc.

Temporary Bench Marks  These are the reference points on which a day’s work is closed and from where levelling is continued next day in the absence of a permanent B.M. Their elevations are referred to as the reduced levels. Such bench marks should be carefully established on permanent detail points such as km stones, parapets, floor of verandahs, roots of old trees, etc. Their correct descriptions should invariably be written in level books.

True Bearing.  The horizontal angle between the true meridian and the survey line measured in a clockwise direction, is called true bearing of the line.

Magnetic Bearing.  The horizontal angle which a survey line makes with the magnetic meridian, is called magnetic bearing. It is not constant at a point but varies with laps of time. 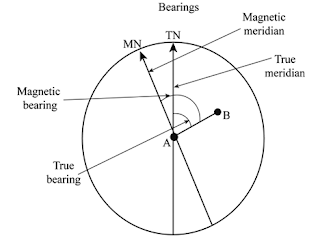 Effect of curvature.  The effect of the curvature on a staff reading, is equal to the distance between the points where the line of sight and level line through the level, intersects the staff. The correction for curvature is, therefore, negative and is always subtracted from the staff reading.

Effect of refraction.  The line of sight provided by a level does not remain straight. It gets bent towards the earth due to refraction as it passes through layers of air of different densities. The effect of refraction is therefore opposite to that of curvature and the points appear higher than what they really are. The correction of refraction is always added to the staff readings.

Radiation Method.  In this method, a plane table is set up at any commanding station. Detail points are plotted on their radiating lines drawn from the location of the instrument station, after reducing their respective ground distances on the desired scale of survey. This method is suitable for the survey of small areas which can be commanded from a single station.

Resection Method.  The process of determining the location of the station occupied by the plane table, by means of drawing rays from stations whose locations have already been plotted on the sheet, is called resection.

Compound curve  A curve which consists of two or more arcs of different circles with different radii having their centres on the same side of the common tangent in succession, each bending in the same direction, is known as a compound curve. 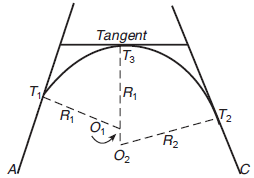 Reverse curve  A curve which consists of two opposite circular arcs of same or different radii, is known as a reverse curve. In such curves the centres of the arcs are on the opposite sides of the curve. The two arcs turn in opposite directions with a common tangent at the junction of the two arcs. 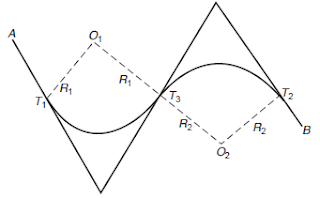 Horizontal Curves.  Horizontal curves are provided to change the direction or alignment of a road. Horizontal Curve are circular curves or circular arcs. The sharpness of a curve increases as the radius is decrease which makes it risky and dangerous. The main design criterion of a horizontal curve is the provision of an adequate safe stopping sight distance. These may be further classified as : (i) Simple (ii) Compound (iii) Reverse (iv) Transition.

Tilt:  It is the rotation of the aerial camera about the line of flight.

Tip:  It is the rotation of the aerial camera about a horizontal axis normal to the line of flight. This is also known as swing. 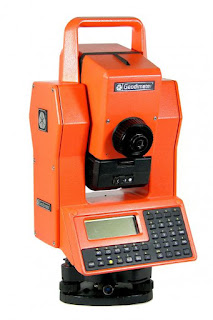 Tellurometer. The main principle of working of this instrument is similar to that of the Geodimeter with the exception that in it high-frequency radio waves (microwaves) are used instead of light waves. With this modification, tellurometers can be used during the day and night and even in hazy weather, whereas the Geodimeters are used at nights only. 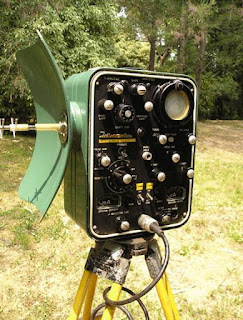 Aerial photograph.  These are the photographs obtained as a result of photography of ground from
the air with a camera mounted on an aircraft. The image of the ground photographed is formed on the focal plane of the camera’s objective, where a sensitive film is placed.

Satellite image.  Satellite images are exclusively digital and are taken using a series of electronic scanners incorporated in satellites that orbit the Earth. Satellites generally operate at altitudes greater than 20,000 metres, resulting in much wider angle shots with less detail than aerial photos.