December 06, 2021
Choose the correct answers (1 x 20)
1. In the absence of an unbalanced force within the system itself and also between the system and the surroundings, the system is said to be in
(a) Thermal equilibrium
(b) Mechanical equilibrium
(c) Chemical equilibrium
(d) Phase equilibrium
2. First law is based on
(a) Law of conservation of mass
(b) Law of conservation of energy
(c) Law of conservation of momentum
(d) None of the above
3. When a liquid flows through a tube with subcooled or saturated boiling, the process is called
(a) Pool boiling
(b) Bulk boiling
(c) Convection boiling
(d) None of the above
4. A system comprising a single phase is called a
(a) Closed system
(b) Open system
(c) Isolated system
(d) Homogeneous system
(e) Heterogeneous system
5. Throttling process is
(a) A reversible and constant entropy process
(b) A reversible and constant enthalpy process
(c) An irreversible and constant enthalpy process
(d) Reversible and isothermal process
6. In a psychrometric chart, the vertical scale shows
(a) Wet-bulb temperature
(b) Dry-bulb temperature
(c) Adiabatic saturation temperature
(d) Specific humidity
7. A 10-tonne refrigeration system consumes 10 k W of electrical energy. Its COP will be
(a) 10
(b) 3.5
(c) 0.35
(d) 35
8. Which one of the following statements is correct?
(a) The heat and work are boundary phenomena
(b) The heat and work represent the energy crossing the boundary of the system
(c) The heat and work are path functions
(d) All of the above
9. For the same maximum pressure and temperature
(a) Otto cycle is more efficient than diesel cycle
(b) Diesel cycle is more efficient than than Otto cycle
(c) Dual cycle is more efficient than Otto and diesel cycles
(d) Dual cycle is less efficient than Otto and diesel cycles
10. A hollow sphere with uniform temperature and a small hole behaves very nearly as
(a) White body
(b) Opaque body
(c) Black body
(d) Gray body
11. The emissivity of a black body is
(a) 0
(b) 0.5
(c) 0.75
(d) 1
12. Which one of the following is an intensive property?
(a) Internal energy
(b) Enthalpy
(c) Density
(d) Volume
13. The triple point of water is
(a) 273 K
(b) 273.16 K
(c) 273.02 K
(d) None of the above
14. For evaporators and condensers, under the given conditions, LMTD for counterflow will be
(a) Greater than parallel flow
(b) Equal to parallel flow
(c) Less than parallel flow
(d) None of the above
15. In free convection heat transfer, the transition from laminar to turbulent flow is governed by the critical value of the
(a) Reynold’s number
(b) Grashoff's number
(c) Reynold’s number, Grashoff's number
(d) Prandtl number, Grashoff's number
16. For a closed system, the difference between the heat added to and the work done by the system is equal to the change in
(a) Enthalpy
(b) Internal energy
(c) Entropy
(d) None of the above
17. In a reversible adiabatic compression
(a) Pressure remains constant
(b) Temperature remains constant
(c) total heat remains constant.
(d) Cooling takes place
18. The average value of thermal conductivity for water at 20 °C saturate is about 0.51
(a) True
(b) False
19. The critical radius of insulation of a spherical cell is
(a) h/k
(b) 2h/k
(c) k/h
(d) 2k/h
20. Heat transfer by convection is described by
(a) Fick’s law
(b) Fourier's law
(c) Newton's law of cooling
(d) Stefan-Doltzman law
Answers
1. (b)
2. (b) In the early part of the nineteenth century the scientists developed the concept of energy and
the hypothesis that it can be neither created nor destroyed; this came to be known as the law of the
conservation of energy. The first law of thermodynamics is merely one statement of this general
law/principle with particular reference to heat energy and mechanical energy i.e., work.
3. (a) Pool boiling is a heat transfer mechanism carrying a phase transition from liquid to vapour. Pool boiling is defined as boiling from a heated surface submerged in a large volume of stagnant liquid. This liquid may be at its boiling point, in which case the term saturated pool boiling is employed, or below its boiling point when the term subcooled pool boiling is used.
4. (d)
5. (c) A throttling process is defined as a process in which there is no change in enthalpy from state one to state two, h₁ = h₂; no work is done, W = 0; and the process is adiabatic Q = 0.
6. (b) Boundaries of the psychrometric chart are a dry-bulb temperature scale on the horizontal axis, a humidity ratio (moisture content) scale on the vertical axis, and an upper curved boundary which represents saturated air or 100-per cent moisture-holding capacity. The chart shows other important moist air properties as diagrammed in Figure 2: wet-bulb temperature; enthalpy; dewpoint or saturation temperature; relative humidity; and specific volume. 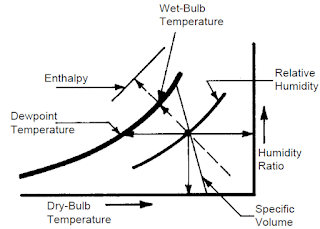 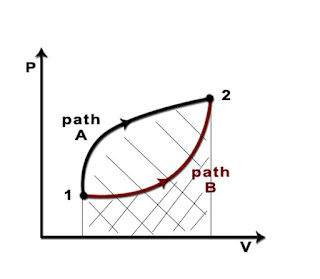 Similarly, let us consider two paths A and C on T-s diagram. we know that area projected on the entropy axis on the T-s diagram gives energy transfer. On the above diagram, it is clear that the area inscribed by path A is different from the area inscribed by path C i.e. energy transfer depends upon the path. so it is a path function. and hence not a property of the system. 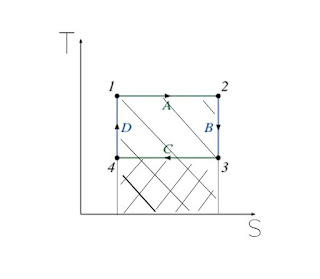 9. (b) Diesel engines are more efficient than Otto engines because the latter must operate at lower compression ratios to avoid knocking.
10. (c) The hole has the attributes of a nearly perfect thermal black body.
11. (d) Real materials emit energy at a fraction - called the emissivity - of black-body energy levels. By definition, a black body in thermal equilibrium has an emissivity of ε = 1.
12. (c)
13. (b) In thermodynamics, the triple point of a substance is the temperature and pressure at which the three phases (gas, liquid, and solid) of that substance coexist in thermodynamic equilibrium. the triple point of water (273.16 K, 0.01 °C, or 32.018 °F). 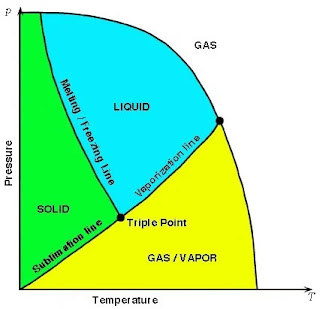 14. (b)
15. (d) In free convection, "h" is the function of Pr number and Gr number. In forced convection "h" is the function of Pr number and Re number.
16. (b) The first law of thermodynamics states that the change in internal energy of a system equals the net heat transfer into the system minus the net work done by the system. In equation form, the first law of thermodynamics is ΔU = ΔQ - ΔW
17. (c) According to the first law of thermodynamics,  Internal  Energy dU = q + w
For an adiabatic process, q = 0, therefore the change in internal energy will be equal to the work done by the system. This indicates that the work must be done at the expense of internal energy since no heat is being supplied from the surroundings. Thus, we can conclude that in an adiabatic process, the quantity which remains constant is the total heat of the system.
18. (a)
19. (d) The thickness up to which heat flow increases and after which heat flow decreases is termed critical thickness. In the case of cylinders and spheres, it is called the critical radius.
20. (c) Newton's law of cooling applies to convective heat transfer; it does not apply to thermal radiation. Newton's law of cooling states that the rate at which an object cools is proportional to the difference in temperature between the object and the object’s surroundings. Simply put, a glass of hot water will cool down faster in a cold room than in a hot room.
---
The study material for AMIE/B Tech/Junior Engineer exams is available at https://amiestudycircle.com
AMIE - Thermal Science & Engineering