Differentiate between the following (2x10)

Fore bearing and Back bearing

The bearing of a line in the direction of progress of the survey is called the fore or forward bearing.

The bearing of a line in the opposite direction of progress of the survey is known as back or reverse bearing.

The bearing of a line is indicated in the order in which the line is lettered. Thus, the bearing from A to B is α the fore bearing a of the line AB. whereas the bearing of line AB in the direction B to A is its back bearing β. 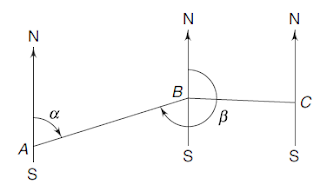 Global Positioning System (GPS) is a satellite navigation system based on the principle of trilateration. Trilateration is a method used to find the location of a point if its distances from at least three other stations of known coordinates are predetermined. 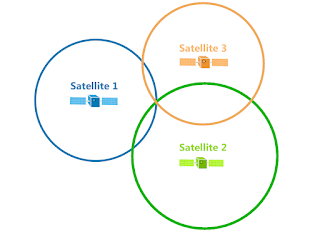 A level surface is a curved surface, every point on which is equidistant from the centre of the Earth and every surface element is normal to the plumb line. It is parallel to the mean spheroidal surface of the earth. However, for plane or ordinary surveying, a level surface at any point is assumed to be a plane surface perpendicular to the plumb line at that point. The particular surface at the average sea level is known as mean sea level.

Rise and Fall and Height of Instrument method of levelling

It consists of determining the difference of levels between the consecutive points by comparing their staff readings. The rise or fall is obtained by calculating the difference between the consecutive staff readings. A rise is indicated if the backsight is more than the foresight, and a fall if the backsight is less than the foresight. Then the reduced level of each point is obtained by adding the rise to, or by subtracting the fall from the reduced level of the preceding point.

It is the operation of levelling in which the difference in elevation between two points is accurately determined by two sets of reciprocal observations. This method is very useful when the instrument cannot be set up between the two points due to an obstruction such as a valley, river, etc., and if the sights are much longer than are ordinarily permissible.

The two-point problem consists of locating the position of a plane table station on the drawing sheet by observation of two well-defined points, whose positions have already been plotted on plan.

In a particular case, the perspective and the orthographic, produce similar images. This is when the ground is flat and the film is horizontal, i.e., the optical axis of the camera is vertical. Such a photograph is known as a vertical photograph and it may be considered to represent the plane of the ground.

True error and most probable error

Principal point and Isocentre in an aerial photograph

It is the point on an aerial photograph in which the bisector of the angle of tilt meets the photograph. In given figure, i is isocentre. It lies on the principal line at a distance of f tan (t/2) from the principal point. 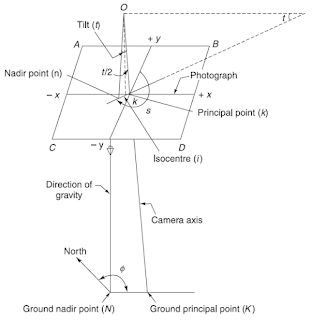 Platforms are commonly called the vehicles or carriers for remote sensing  devices. A platform is a synonym for any orbiting spacecraft, be it a satellite or  a manned station, from which observations are made. In most instances, the  platforms are in motion and by movement they automatically proceed to new  positions from where, they target new objects. A satellite orbiting the Earth is  a typical platform however, the platforms range from balloons, kites (low  altitude remote sensing) to aircrafts and satellites (aerial and space remote  sensing). As we go higher in the sky, larger area is viewed by the sensor.

The sensor systems are simply the eyes of the  satellites that view and record the scene. Sensors are the special instruments  mounted on the platforms (aeroplane or satellite) usually having sophisticated  lenses with filter coatings, to focus the area to be observed at a specific region  of EMS. Solar radiation is the main source of EMR and is a combination of  several wavelengths such as gamma ray, x-ray, visible, infrared, thermal and microwaves. Sensor systems mainly operate in the visible, infrared, thermal  and microwave regions of EMR.