Answer the following in brief (5 x 4)

Restrictions on pole and zero locations in the transfer function.

The restrictions on pole and zero locations in the Conditions For Driving Point Function with common factors in P(s) and Q(s) cancelled are listed below.

What is a dominant pole? What is the location of poles for stable systems? 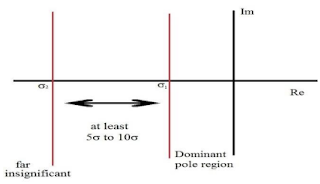 Location of poles for a stable system Which is greater between gain and phase cross over frequency?

When a proportional controller is introduced in a system, does its performance improve or not?