Differentiate between (any four) (4 x 5) 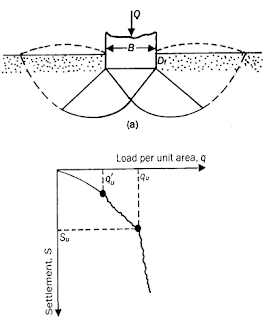 Cantilever Retaining Wall
These are the reinforced concrete walls in which lateral earth pressure is resisted by the structural action of its members. The base of the wall is extended into the backfill on the heel side and is known as heel slab, as shown in the figure. The backfill over the heel slab provides significant additional lateral stability to the wall. The back of the wall on the heel side is also given a slope. This increases the width of the wall with depth, similar to the increase in lateral earth pressure with depth. 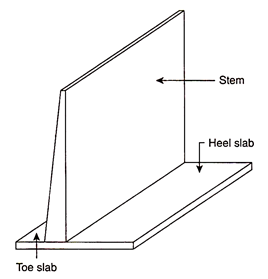 The vertical wall (known as the stem), the heel slab, and the toe slab act as cantilevers fixed at their junction and spanning to the other end. The stem is subjected to lateral earth pressure, causing bending away from the backfill. The heel slab and the toe slab are subjected to resultant upward soil pressure from the bottom and bend upward. Reinforcement is therefore provided on the tension side, that is, vertically on the backside of the stem and horizontally at the bottom of the heel slab and the toe slab.
Counterfort Retaining Wall
When the height of a cantilever retaining wall is more than about 7 m, it is economical to provide a vertical bracing system, known as counterforts, on the backfill side above the heel slab. The counterforts are triangular beams of variable depth and uniform width, connecting the heel slab and the stem, provided at regular spacing along the length of the wall, as shown in the following figure. 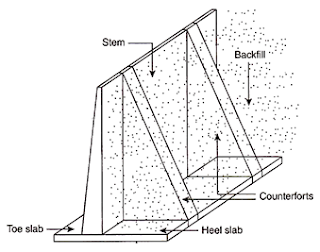