Quicksand condition is the floatation of particles of cohesionless soil, like fine gravel and sand, due to vertical upward seepage flow. As sand boiling occurs, the bearing capacity and shear strength of the cohesionless soil decrease and the agitations of soil particles become apparent.

Quicksand condition is not a type of soil, but a flow condition that occurs in cohesionless soils. Practically, boiling conditions may occur when excavations are made below the water table and water is pumped out from the excavation pit to keep the area free from water.

Vibro-compaction is a ground improvement method that uses a specialized vibrating probe for in-situ subsurface compaction of loose sandy or gravelly soils at depths beyond which surface compaction efforts are effective.
The vibrating probe densifies loose granular, cohesionless soils by using mechanical vibrations and, in some applications, water saturation to minimize the effective stresses between the soil grains which then allows the oil grains to rearrange under the action of gravity into a denser state.
Generally, Vibro-compaction can be used to achieve the following enhanced soil performance or
properties:

It is a composite material formed by cohesionless soils and flexible metal reinforcing strips. The reinforcement and the earth are joined together through friction. One alternate arrangement to avoid the conventional arrangement will be the Reinforced earth wall. This method will be used to support soil embankments. This arrangement is useful to support the higher depths of soil embankment with minimized cost.
A typical section of a Reinforced earth structure is shown below. 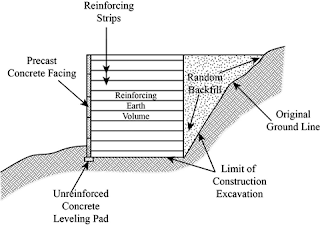 Differentiate between the following (2 x 6)

Flocculent and dispersed structure of the soil.