What is glare? Enumerate the steps to control it.

The human eye is sensitive to a particular range of luminance, which is determined by the average adaptive luminance in the visual field. This range at the lower end is determined by the threshold of vision, the point at which an object can just barely be seen. By increasing the luminance level the clarity improves but beyond a certain luminance level, even though we go on increasing the luminance, there won’t be any further improvement in the clarity with which we see the object. This we call the upper range of luminance. The effects of this unwanted light on visual performance is classified into two types, (i) discomfort glare, which increases eye fatigue, causes distraction and generally plays havoc with the human factor. (ii) disability glare, which reduces the task visibility

What are the major sources of noise in underground mining, highlighting the permissible levels of noise in those?

The ambient noise level of the underground mining area is affected by the operation of the cutting machines, tub/conveyor movement and blasting of the coal. The movement of coaling machines and transport units-conveyor, tubs and transfer points caused audible noise which becomes disturbing underground because of the poor absorption by the walls.

Explain how the ‘methane layering number' can be determined.

Methane emitted from the strata into a mine opening will often be at concentrations in excess of 90 per cent. While being diluted down to safe general body concentrations, the methane will, inevitably, pass through the 5 to 15 per cent range during which time it is explosive. It is, therefore, important that the time and space in which the explosive mixture exists are kept as small as possible. This can be achieved by good mixing of the methane and air at the points of emission. Unfortunately, the buoyancy of methane with respect to air (specific gravity 0.554) produces a tendency for concentrated methane to collect in roof cavities and to layer along the roofs of airways or working faces.
If
velocity of the ventilating airstream, u (m/s)
rate of gas emission, Qg (m3/s)
width of airway W (m)
Then

The dimensionless group, L, is known as the Layering Number and is of fundamental significance in the behaviour of methane layers.

State the parameters needed to examine in order to select an appropriate location of a booster for a ventilation system.

The following points should be home in mind when selecting the location of a booster fan:

Fires underground can be classified into two broad groups, open and concealed fires. Open fires occur in airways, faces and other openings that form part of the active ventilation system of the mine and, hence, affect the quality of the mine airflows quickly and directly. As the term might imply, open fires are often accompanied by flaming combustion because of the availability of oxygen and offer the possibility of direct attack by fire fighting teams. Conversely, concealed fires occur in areas that are difficult or impossible to access such as caved or abandoned zones. These are usually, but not necessarily, initiated as a result of spontaneous combustion and can occur in both coal and sulphide ore minerals as well as within any imported organic matter such as paper, discarded fabrics or timbering in abandoned areas.

The toxic character of carbon monoxide has been well known for many centuries. At low concentrations, carbon monoxide may cause nausea, vomiting, restlessness, and euphoria. As exposure increases, a person may lose consciousness and go into convulsions. Death is a common final result.

Coward diagram helps us to find the flammability of methane-air mixtures as the composition changes. 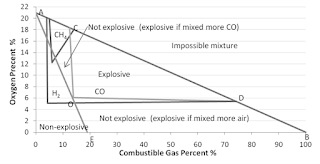 What do you understand by the critical pressure of the booster fan?

It is the highest pressure produced by the booster fan without causing a reversal of air current.
---
AMIE - Mine Ventilation and Environmental Hazards