1. (c) The sequent peak procedure (Thomas and Burden, 1963) is commonly used to determine the reservoir capacity required to meet a stipulated demand over a given record of inflows. This method utilizes a plot (or tabulation) of cumulative differences between inflows and drafts as a function of a specified time interval.
2. (b) Mass curve method is commonly used to estimate the required storage capacity of a  reservoir in project planning stage. The method uses the most critical period of recorded flow to  compute storage. The critical period is defined as the duration in which initially full reservoir  depletes and, passing through various states, empties without spilling.
3. (a) 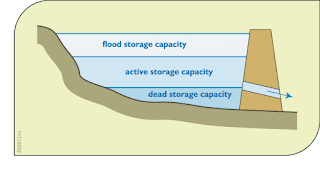 4. (a) If the feasible region of an LPP is empty, the solution is infeasible. A linear program is infeasible if there exists no solution that satisfies all the constraints -- in other words, if no feasible solution can be constructed. Since any real operation that you are modelling must remain within the constraints of reality, infeasibility most often indicates an error of some kind.
5. (a) A Chi-Square goodness of fit test is used to determine whether a categorical variable follows a hypothesized distribution. We can use a Chi-Square goodness of fit test to determine if there is a statistically significant difference in the number of expected counts for each level of a variable compared to the observed counts.
6. (a)
7. (b)
8. (a) A lumped model is generally applied in a single point or a region for the simulation of various hydrologic processes. The parameters used in the lumped model represent spatially averaged characteristics in a hydrologic system and are often unable to be directly compared with field measurements.
9. (c) Graphic method can be applied to solve an LPP when there are only two variables. This method is used to solve a two variable linear program. If you have only two decision variables, you should use the graphical method to find the optimal solution. A graphical method involves formulating a set of linear inequalities subject to the constraints. Then the inequalities are plotted on an X-Y plane.
10. (c) A type II error does not reject the null hypothesis, even though the alternative hypothesis is the true state of nature. In other words, a false finding is accepted as true. A type II error can be reduced by making more stringent criteria for rejecting a null hypothesis.
---
AMIE - Water Resources Systems