Answer the following (10 x 2)
Define the Distribution factor used in the Moment Distribution Method.
Consider a joint in a structure where two or more members meet. If an external moment M is applied to such a joint, the joint undergoes a rotation θ. Since all the members meeting at this joint undergo the same rotation θ. the applied moment M is distributed to each of the ends of the members according to their relative stiffness values. The factor by which the applied moment is multiplied to obtain the end moment of any member is known as the distribution factor (D.F.).
State Castigliano’s Second Theorem.
Castigliano’s Second Theorem: If a linearly elastic structure is subjected to a set of loads, the displacement of any load in its direction is equal to the partial derivative of the total strain energy with respect to that load.

Pi and Di can also be the moment and the angular rotation respectively.
State relationship between Flexibility and Stiffness matrix
The element stiffness matrix 'k' is the inverse of the element flexibility matrix 'f' and is given by f=1/k or k =1/f.
When the Moment Area method is preferred to calculate Deflection. Explain?
The moment-area method of determining deflections provides a convenient means of determining slopes and defections in beams and frames. This is a semi-graphical method and can be conveniently used for members of the varying moments of inertia and discontinuous loadings.
Differentiate between lacing and battens.
Lacing
The lacing is also termed as ‘latticing’ and it is most commonly used. The rolled steel flats, angles and channels are used for lacing. The rolled steel sections or tubes of equivalent length may also be used instead of flats. The lacing is of two types: (i) Single lacing (ii) Double lacing. 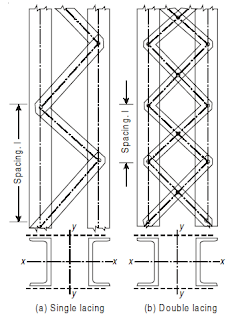 Battens
The batten plates are also called the plates, and these are also used in the lateral systems. The angle sections, channels and I-sections are also used as battens. The components of the built-up column sharing the load are connected together by batten plates.

Battened plates
Write a short note on Plastic Analysis?
Elastic behaviour of structures is useful to study the performance of the structure, especially with regard to serviceability under working load. However, in steel structures, if the load is increased, some of the sections in the structure may develop yield stress. Any further increase in load causes the structure to
undergo elastoplastic deformations and some of the sections may develop a fully plastic condition at which a sufficient number of plastic hinges are formed transforming the structure into a mechanism. The mechanism would collapse without noticeable additional loading.
A study of the mechanism of failure and knowledge of the load causing the mechanism is necessary to determine the load factor. A structure is designed so that its collapse load is equal to or higher than the working load multiplied by the load factor specified. Design of structures based on the plastic approach is being increasingly used and adopted in various codes of practice, particularly for steel structures.
Compare riveted, welded and bolted connections.
Explain the following terms - pitch, gauge, end distance and edge distance
Pitch of Rivet (p)
The pitch of rivets is the distance between two consecutive rivets measured parallel to the direction of the force in the structural member, lying on the same rivet line. It is the centre to centre distance between the individual fasteners.
Gauge Distance of Rivets (g)
The gauge distance is the transverse distance between two consecutive rivets of adjacent chains (parallel adjacent lines of fasteners) and is measured at right angles to the direction of the force in the structural member. 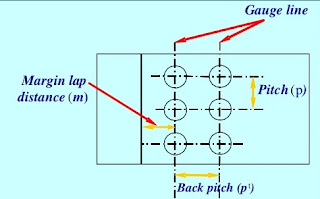 Edge Distance
A minimum edge distance of approximately 15 times the gross diameter of the rivet measured from the centre of the rivet hole is provided in the riveted joint. 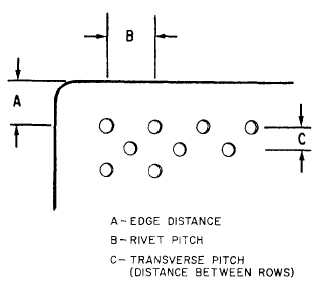